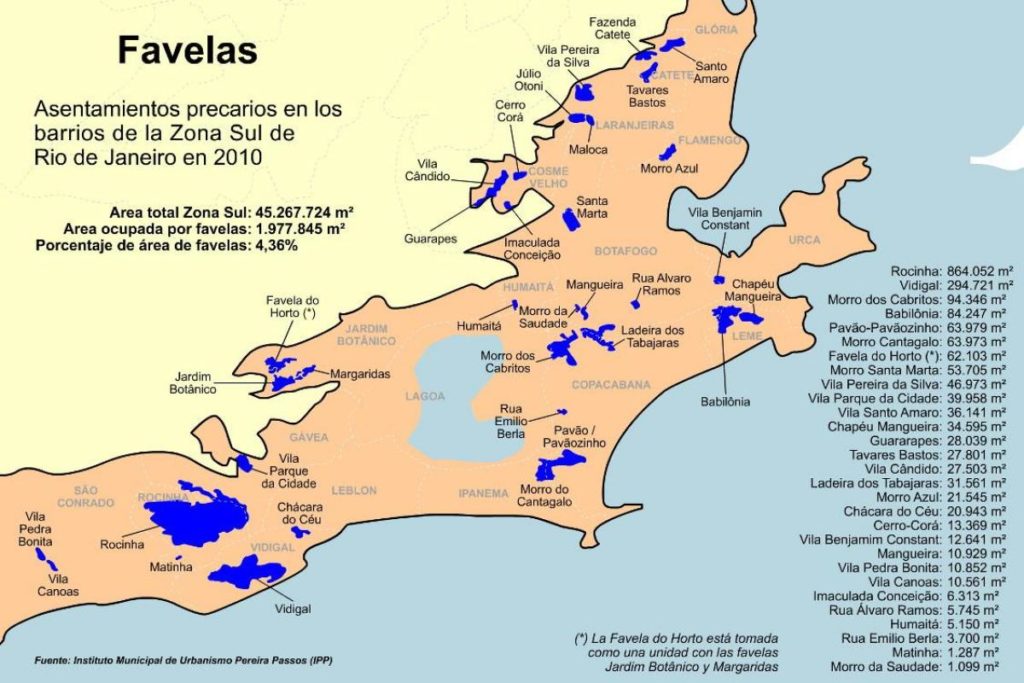 Favelas are low-income urban communities, that have been stereotyped for ages and still to this day live under the shadow of these preconceptions, receiving little to no support from the public authorities as well as very few tourists. The city of Rio de Janeiro receives around 2.8 million tourists per year yet only 1.5% of all tourists visit Rio’s favelas.

The culture of Rio’s favela was born in the late 1800s. After the Canudos War in Bahia, Brazilian soldiers marched to Rio de Janeiro and waited in the hillsides for the government to hand over their deserved payment. Yet they never got paid, and consequently they never left. They settled into makeshift accommodation in a neighborhood that came to be known as Morro da Favela, named after the favela trees in Bahia that the soldiers had previously lived among.

The opportunities for unskilled labourers in the area also attracted former slaves, many of whom had only been freed in 1888. With given little thought as to how these newly liberated slaves would make a living, the government in a way, accepted these irregular constructions since there was no budget for the construction of better housing. Hundreds of thousands  came from across Brazil to Rio, forming communities around the outskirts of what was then the capital of the republic. Subsequently, the place came to be called Morro da Providência (it’s close to Cais do Valongo). Migrants also started coming into Rio looking for work in the 1930s and ’40s.

The government moved in to force the migrants out and into more adequate housing in “proletarian parks,” but the initiative failed to eradicate the settlements. During the 1960s, the government again tried to wipe out the favelas, particularly ones near popular tourist destinations. While some of them were eliminated, others only expanded after displaced people moved in.

In 1993, the city of Rio de Janeiro created the Favela-Bairro plan. It consisted of private companies imporving infrastructure such as piped water, garbage collection, public lighting, etc.The project took place in about 150 communities. However, in the grips of a financial crisis that was aggravated by Olympic overspending, Brazil has slashed budgets, including implementing a 20-year cap on social spending to try to reduce its massive debt. The spending limits affect every public sector, including education, health, housing and policing. These cuts effect the poorest in society the most. Due to the high poverty, there has been discrimination on people living in favelas.

In the past few decades, Brazil has experienced a significant increase in income inequality. Actually, according to the World Bank Report,20 Brazil has one of the most unbalanced income distributions of the world. Urbanisation along with rural migration and the rising income inequality have produced a geographical concentration of poverty, particularly in the metropolitan areas of the country. 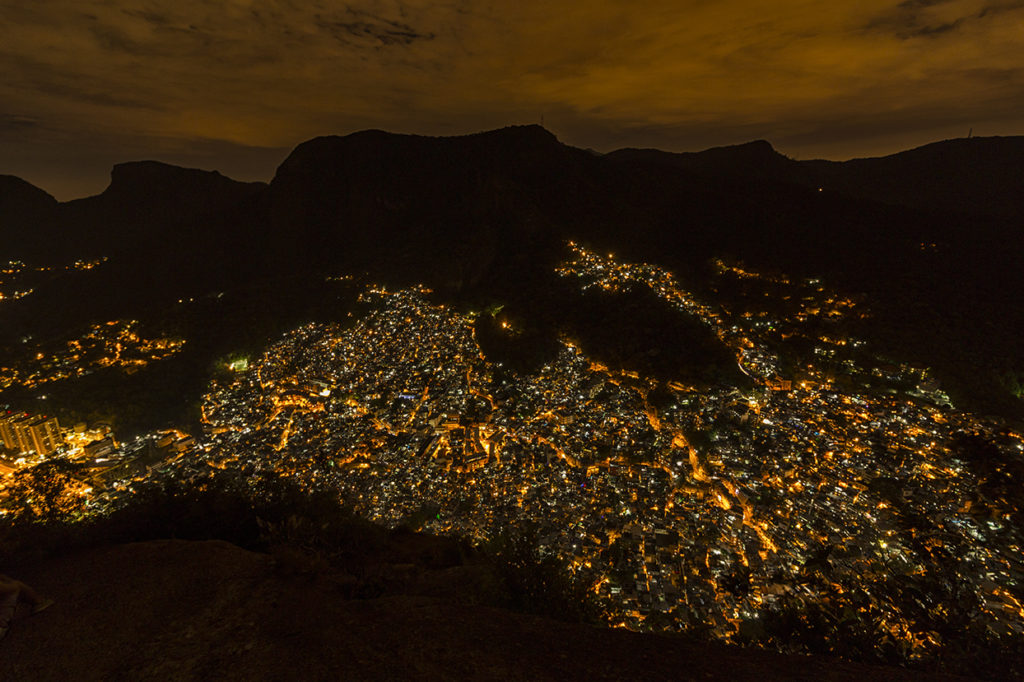 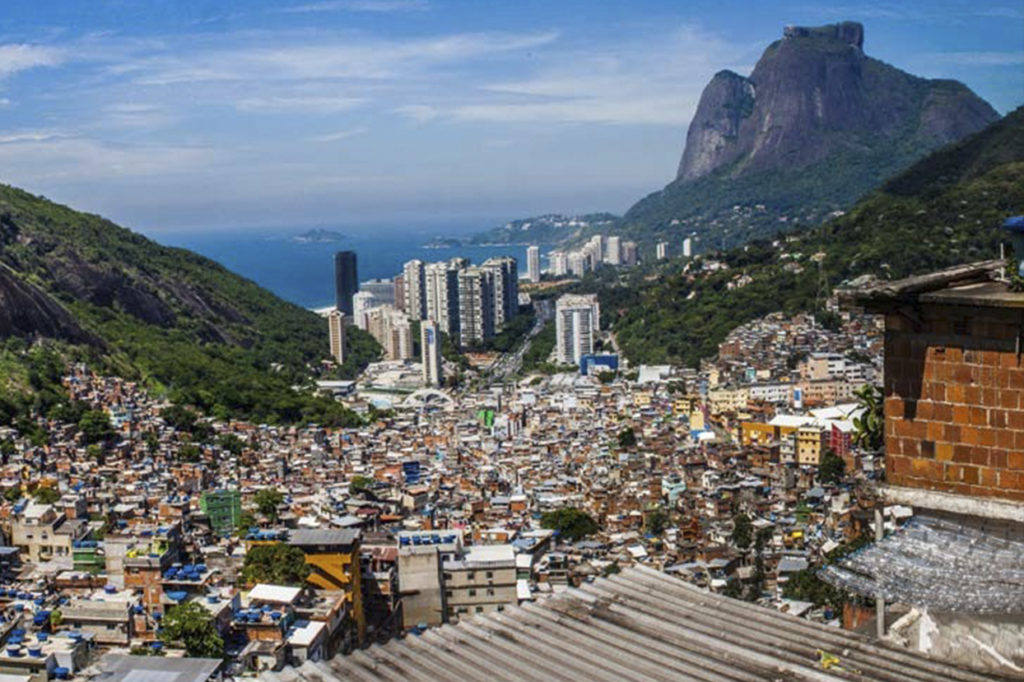 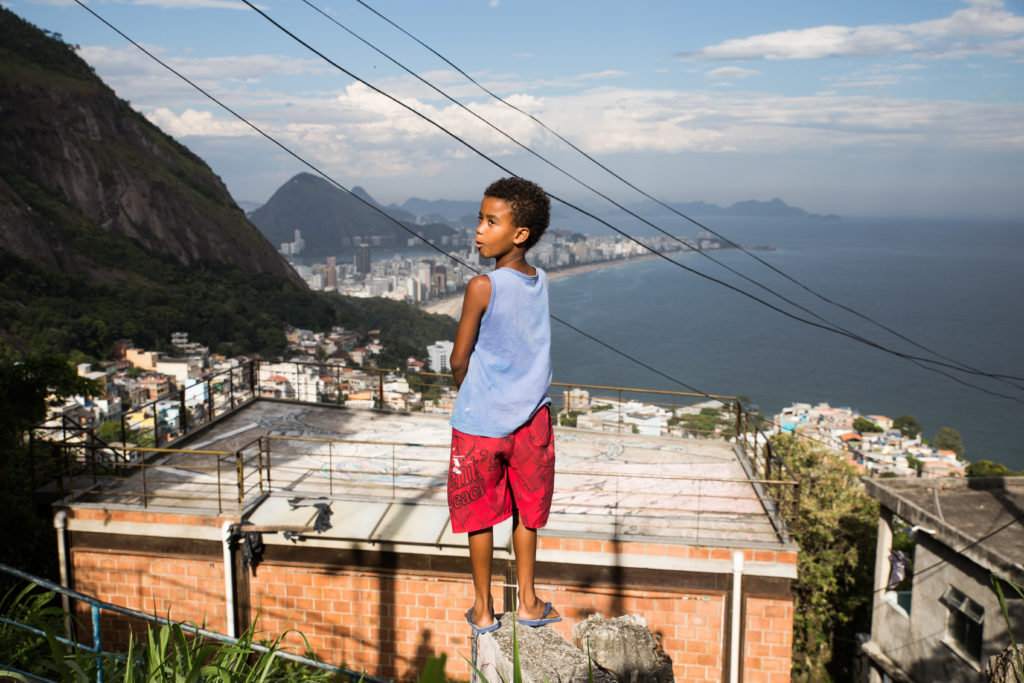 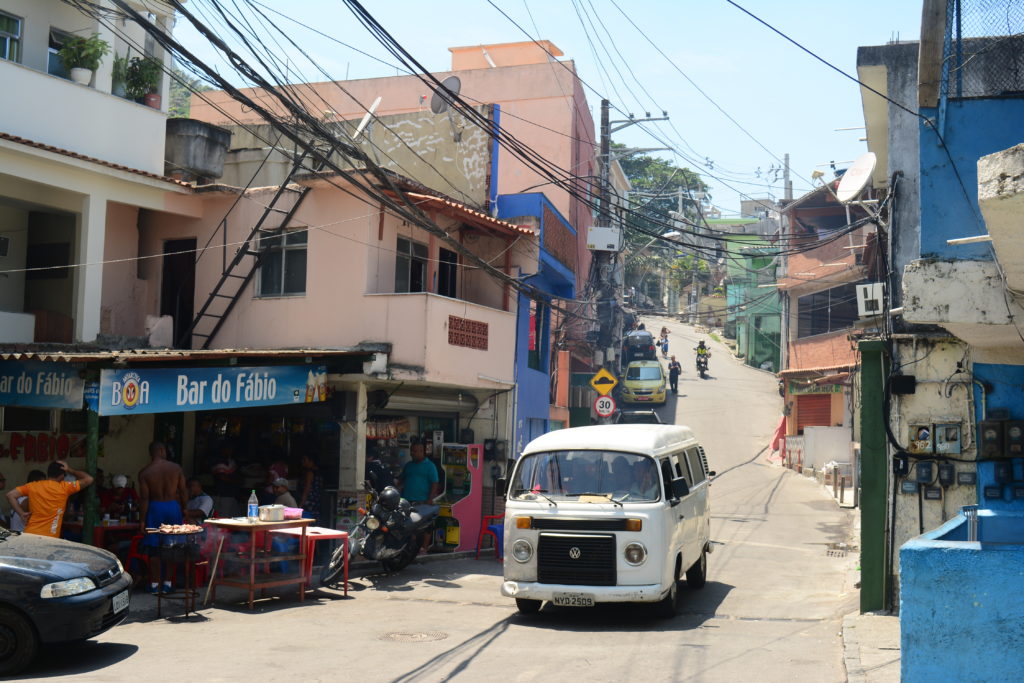 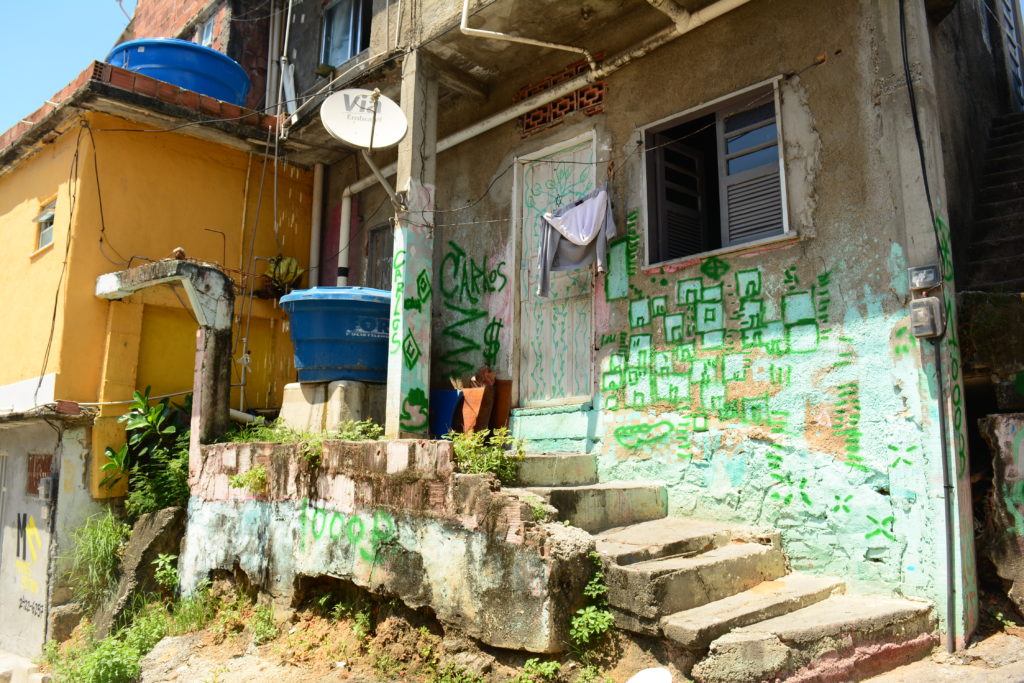 When hearing the word favela, most people would think about drug dealers and violence. Although it is true that favela they are home to several gangs and at times experience high volumes of violence what most people don’t know is that favelas are also home to some of the most creative, friendly and welcoming people you will ever meet. Take Vidigal for example.

Vidigal is a community of nearly 30,000 inhabitants made up of northeasterners, afro-brazilians and foreigners, of which a large percentage are aged 18-24. It’s privileged location in the south zone of Rio between Leblon and São Conrado affords the community spectacular ocean views, easy access to the beach and a strong connection with nature including the famous Dois Irmãos mountain. The average income is roughly R$ 1200, nearly 20% above the minimum wage. That being said Vidigal still faces significant issues with regards to poor infrastructure, open air sewers and occasional police and gang violence. Nevertheless, Vidigal’s rich culture and energetic people provide for a energetic environment where you will never have to worry about being robbed or assaulted, where children still play in the streets and where everybody knows their neighbour.

Here you will find a strong sense of community, where people are respecting and helping one another. Walking through the typical narrow streets of the community, you will find a wide range of cultural happenings such as the Capoeira school, Percussion classes, sports, theatre, live music and social projects. There are many things to do and see here. Vidigal beach is hidden off the main road and you need to go down the winding stairway. It is mostly enjoyed by locals, and much safer then other more touristy beaches. Vidigal’s street art scene is amazing. Whole walls are free canvases for talented Rio artists who use it as a creative outlet. Vidigal is also privileged by being located close to the ocean, at the bottom of the Dois Irmaos mountains and at a much more affordable cost than “on the asphalt”.

The favela should not be seen in terms of Misery, Drugs and Crime, but a place in which hard-working people have spent decades investing in and building neighborhoods with scarcely a government service. Favelas are not ‘hubs of poverty,’ the people who live inside these communities are not ignorant or complacent. Quite the contrary, they possess a ‘do-it-yourself’-spirit and a ‘build-your-own’ mentality that Brazilian mainstream society has much to learn from.

is the average wage per month

do not have a formal sanitation system

of 8 year olds can not read or write

samba schools are located in favelas

Five months of lessons from the favela 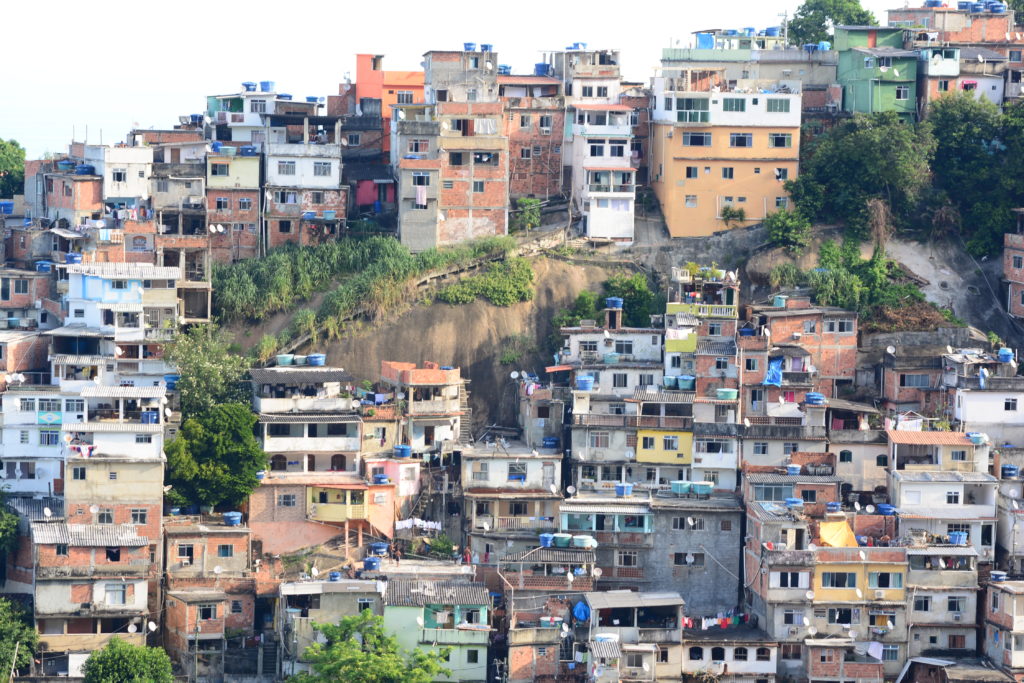 Everyone brings their own preconceptions to the favela, it’s impossible not to given their pervasive representation through narratives tied to violence, drugs, and social breakdown. Within a day in Vidigal those preconceptions start to dissipate… 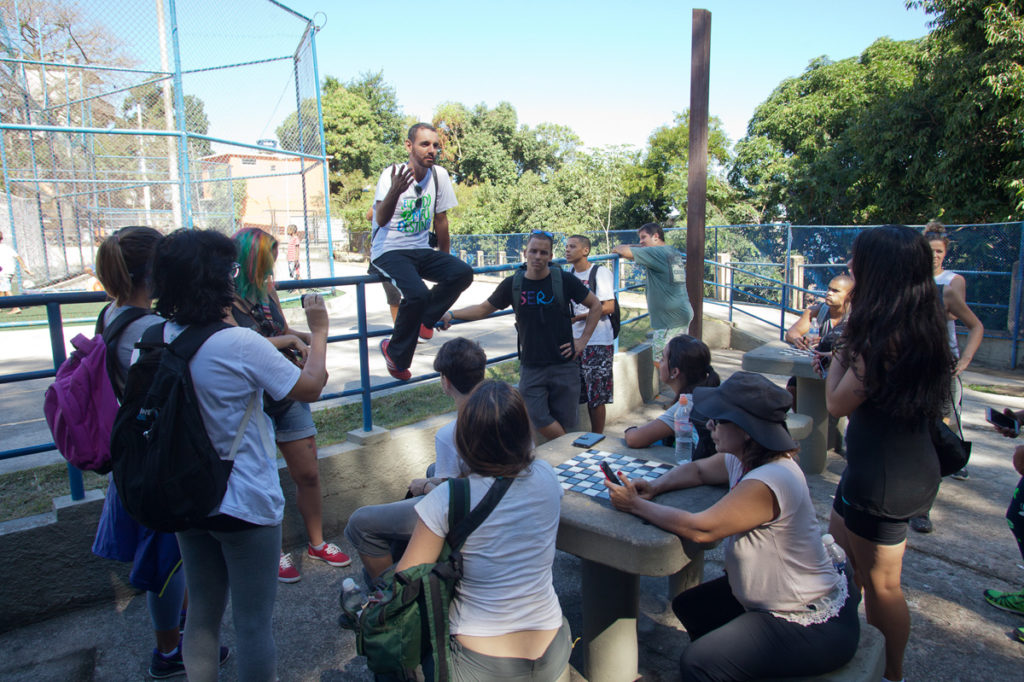 In this piece, we explore the nature and meaning of favelas in Brazil and the ethics of favela tours. Through conversations with residents and community leaders in Vidigal favela in Rio de Janeiro, we consider how community-driven…

At the end of the Favela tour we stood in a narrow dark alley way- it had started raining and behind us loomed a UPP officer (Police Pacification Units) in the shadows. A group of little boys around 8 or 9 years old were running up and down…